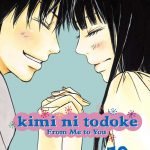 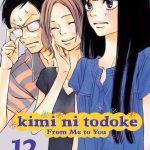 Sawako “Sadako” Kuronuma is the perfect heroine…for a horror movie.

With her jet-black hair, sinister smile and silent demeanor, Sawako “Sadako” Kuronuma always had trouble fitting in. But her whole life changes when she befriends the most popular boy in class, Shota Kazehaya. Can love trump her cursed life?

Sawako and Kazehaya have confessed their feelings to each other! But now Sawako is worried about her rival, Kurumi. In the past, Kurumi vowed to hate any girl who went out with Kazehaya. So how’s she going to react to the news that Sawako and Kazehaya are dating?

Karuho Shiina was born and raised in Hokkaido, Japan. Though Kimi ni Todoke is only her second series following many one-shot stories, it has already racked up accolades from various “Best Manga of the Year” lists. Winner of the 2008 Kodansha Manga Award for the shojo category, Kimi ni Todoke also placed fifth in the first-ever Manga Taisho (Cartoon Grand Prize) contest in 2008. In Japan, an animated TV series debuted in October 2009, and a live-action film was released in 2010.

Be the first to review “Kimi ni Todoke: From Me to You, Vol. 11” Cancel reply